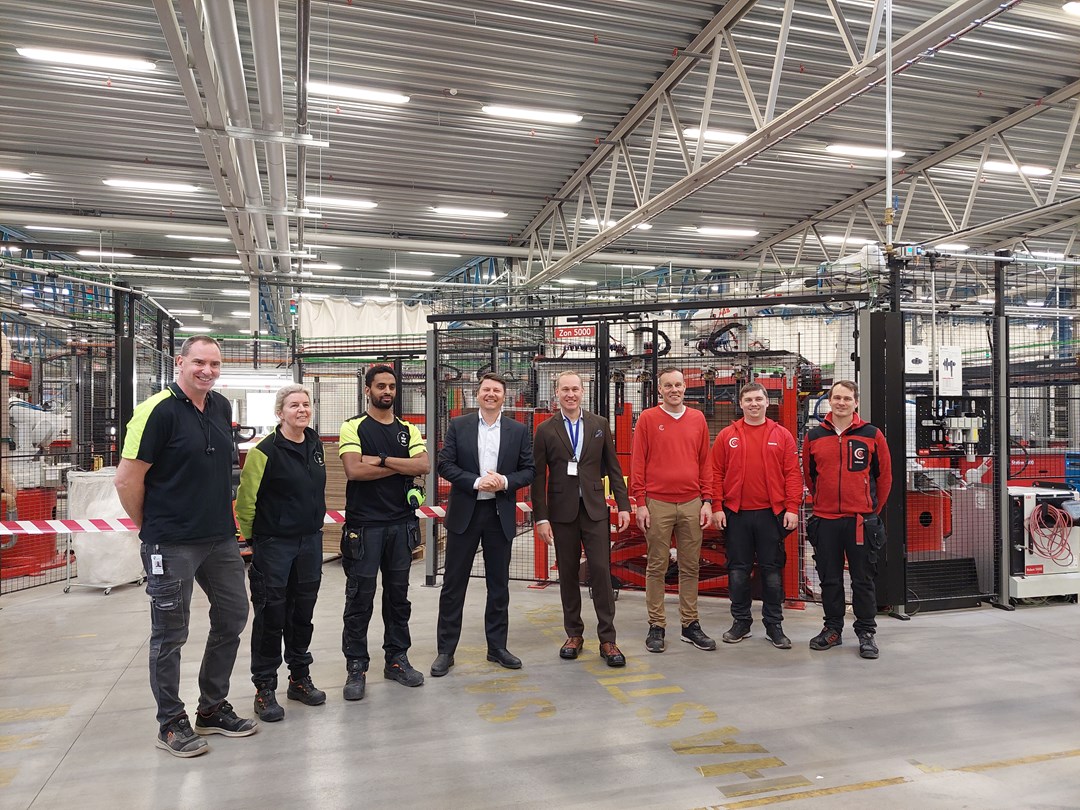 Spaljisten is in the process of investing in growth through increased capacity and capability. A big step forward in streamlining and digitizing the production processes is a highly automated Gladpack packaging line. An innovation, which is now successfully implemented in Spaljisten in collaboration with Automationsteknik. The packing line will also support the increased production capacity that the completion of a new foil wrapping line HGL II in the second half of 2022 will enable at Spaljisten's production.

Spaljisten and Automationsteknik have a long-term collaboration that began as early as 2008. This partnership promotes both parties by boosting profitable growth and competitiveness in the market.

The partnership between Spaljisten and Automationsteknik is well balanced. We undoubtedly make each other better. The inauguration of Gladpack is a substantial milestone in Spaljisten's growth journey - a growth journey that needs to happen in a sustainable, profitable, and inclusive way. We look forward to many years of further developments together with Automationsteknik, says Spaljisten's CEO Fabio Pedrazzi.

The fact that we are now extending our agreement for another 3 years proves that it is a well-functioning collaboration for both parties. I am convinced that both Spaljisten and Automationsteknik will be able to meet current and future demands of the market in both of our industries through this partnership, says Automationsteknik's CEO Jonas Fischer.

Both parties have found new ways to develop and improve throughout the cooperation. 5 years ago, the planning work began for a highly automated packaging line at Spaljisten. Discussions about the needs and opportunities were held together with Automationsteknik, during the first 3 years. A consistent construction and implementation work has been in progress for the last 2 years.

23 different versions of sketches were discussed before the production could finally begin, says Tomas Lundberg, a project manager in Spaljisten.

The new packing line can pack everything from small to large batches in a wide variety of sizes and allows packing up to 15 packages per minute, which is extremely fast. 18 robots work on the line in connection with a double line. Even the way the material arrives at the machine is automated - TEXO tracks that extend through almost the entire production are used for this. Thanks to a higher degree of automation, the physical burden on staff is reduced.

In addition to the executive team and technicians, several machine operators from Spaljisten have been involved in the work from early on. They have contributed valuable knowledge about working methods and insights into technical requirements. The machine operators have also assisted in assuring a good and safe working environment.

The new Gladpack line is fast, stable, and safe. It provides the opportunity to handle increasing volumes as well as the handling of novel cardboard solutions. A highly automated packing line of this type is unique in Spaljisten's industry and has already aroused interest for visits from partners. All this is well in line with the strategic focus areas of Spaljisten and is a big step closer to achieving a turnover of a billion SEK before 2026.

Automationsteknik has a clear growth plan and has established several offices in recent years. During the autumn of 2022, a further expansion will take place with a new office in Växjö.

Spaljisten has both the ability and the capacity, to manufacture considerable volumes of fronts for the furniture industry. The production is located in Åseda, Sweden, where Spaljisten was founded in 1975.

Spaljisten is part of a wood processing group Surewood Industries AB, together with Anebyhusgruppen AB, KG-List AB and Österbymo Hardwood.

Automationsteknik performs everything from technical consulting services to “Turn-Key” solutions with the main areas within the process, wood, manufacturing and food industries. Automationsteknik has its headquarters in Hässleholm and engineering offices in Lund, Älmhult and Helsingborg.

Our employees are our most important resource. We strive for everyone to have the right conditions to thrive, succeed and develop at their job. One way we work to increase diversity in the workplace is that we offer language training in Professional Swedish.

Adam Airosto takes over as the new CEO of Spaljisten

Adam Airosto starts as the new CEO of Spaljisten AB. With extensive experience in leading roles in the manufacturing industry, he takes on the role of CEO of Spaljisten with the task of leading and driving the company's continued development with the vision of being a world-class front manufacturer with the next generation in mind.

A puzzle piece in sustainability work and confidence in the future

For half a year now, Sofie Åkerberg has been working as Sustainability Manager at Spaljisten. She entered on a wave of new energy and dived straight into the world of wood, chipboard and foil wrapping. It is a broad role that she has taken on – seeing over matters of work environment, safety, and sustainability, as well as improvements in all these areas.

Foil slitter helping to optimize the material flow at Spaljisten

Spaljisten's highly automated production facility in Åseda, Småland, is in continuous development. One of the latest innovations in Spaljisten is a foil cutter, an industry-specific machine that we can greatly benefit from.

The big picture and people behind the numbers

Malin Kirejs Hellbjer has been working with everything that has to do with finances at Spaljisten for a year now. How has her first year in Spaljisten been and what excites her in her work and life?

Our products endure most things in life

Sustainability is close to our hearts at Spaljisten – a work that never ends. We aim higher and work for more innovative solutions to reach the next level in our production.

Change of CEO at Spaljisten AB

Innovative solutions and some aces up the sleeve

We find solutions that combine the customer's interest and needs with the conditions that exist in the production and in the materials we use.

We will continue to develop Spaljisten and launch our ambitious plans for 2022-2026. This involves the expansion of our factory areas in Åseda, new lines for foiling with J-profiling, edge processing, internal logistics and packaging, innovations, sustainable materials and of course – further product development.